The SAS is world-famous, and famously secretive.

For the first time, step inside the closed world of 22 Special Air Service Regiment on camp at Hereford garrison. Discover what the most elite soldiers of the British Armed Forces are really like – off duty, off guard and up close.

“Lavers (not her real name) spent three years working in support services inside the closed SAS garrison in Herefordshire … Shocking in places, it’s also funny, moving and reveals the other side of the story”

The SAS is staffed by the toughest and most resourceful soldiers in the world. Only the cream of the crop will get through the rigorous training programme to achieve their status as ‘badged’. They represent the finest the British Armed Forces have to offer, rightly deserving their famous motto ‘Who Dares Wins’.

However, these elite soldiers cannot be identified and their true job is known to very few people. For their own security and the protection of others, the SAS are prohibited from talking about their careers. By necessity, they live secretive lives. So who are they really? And what are they really like?

Because Monica Lavers spent three years working at Hereford garrison, she had a ringside view of how these elite soldiers – ‘geezers’ as they often refer to themselves – live, work and play. By getting to know them as people first, rather than by their fearsome reputation, now she offers a behind-the-scenes look at life on camp that is by turns compassionate, funny and heartbreaking. This book tells the stories of the soldiers’ lives as they were told to her – full frontal and no holds barred.

Come on camp and meet the elite soldiers of 22 Special Air Service Regiment as you’ve never seen them before.

Free postage and signed copies available: add a note to your order at checkout 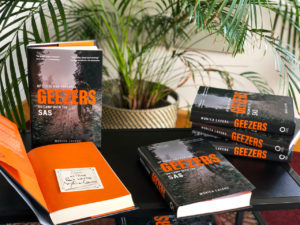 They call themselves ‘geezers’, and a geezer is outside the hangar now, pressing his face to the window then peering through a chink in the curtain covering the door, trying his security pass and pushing the door, flitting from one to the other like a persistent dog trying to get attention. We’re closed. When he catches sight of me, he holds his palms together in a prayer gesture then claps a fist over his heart for good measure.

I recognise him immediately – it’s Christopher ‘Kip’ Formby, the chief instructor whose gravelly Northern Irish accent makes ‘How are you?’ sound like a death threat. He’s ignoring the ‘Closed’ sign on the door, because he thinks that sort of thing doesn’t apply to him. I hear a beep as his pass is pressed against the security pad, a push of the door, then the beep, beep again. Another push, then a rattle. I have the key and, for now, the power.

He’s a difficult man to like, but at least you know where you are with Kip Formby. Bullish, self-obsessed and arrogant, he’s a top counter-terrorism instructor and weapons expert and he doesn’t much mind who knows it. He’s the opposite of humble and unassuming – everything his renowned regiment should be – he even drops hints about his regimental identity when he’s out in town just in case anybody should think he’s merely an ordinary person.

I pull back the makeshift curtain. Outside is the usual colourless, miserable scene of shipping containers, Portacabins and parked cars belonging to men out of the country for months, weeds growing up around them – and Kip Formby in combats and a thick jacket, his dog beside him. The sky is so low, it feels like a lid. Snow clouds, they say. I tap the imaginary watch on my wrist and shake my head and he responds with a dramatic scowl and arms spread, mouthing What the fuck?

Oh well, it’s nearly Christmas, and it’s freezing and cheerless out there, so I decide to give him the benefit of the doubt. I’m winding things down anyway, emptying bins and sorting our monthly racking registers and fire extinguisher records. Honestly, you wouldn’t believe the stuff we do in this store. The place is massive and there are only two of us working, Craig and me, and God knows where Craig is this afternoon. I take pity on Kip because most of camp has gone away now for Christmas, with only us poor remnants of the civilian staff left in case something bad happens somewhere in the world and supplies are needed. We had several emergencies last year, and yours truly was speedily packing crates with foot powder and toilet paper. Elite soldiers need toilet paper like anybody else.